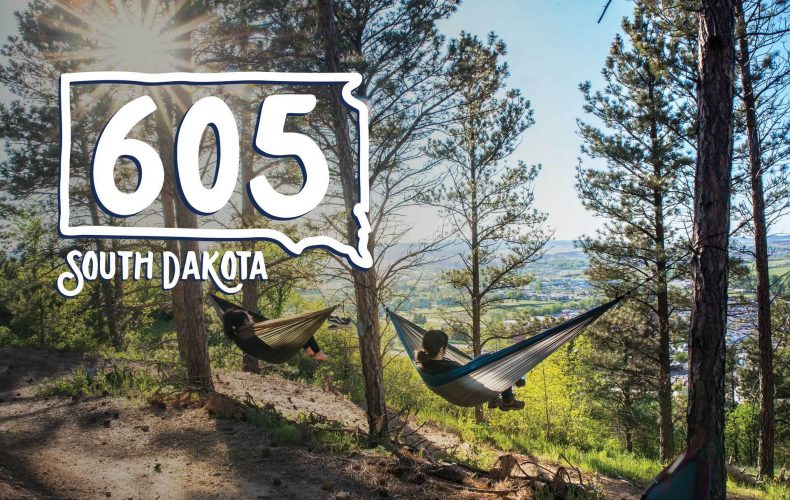 Every June 5, South Dakotans celebrate 605 Day. The unofficial “holiday” was dreamed up by the South Dakota Department of Tourism in 2016 as a way to engage residents and encourage them to share their pride for the state. South Dakota is one of only twelve states with a single area code (605), a number that has become synonymous with our culture, so choosing a date to show appreciation for this place we call home was a no-brainer: June 5 (6/05) it was!

The annual celebration was low-key at first, but is picking up steam as it heads into its fifth year. People are urged to pay tribute on social media by using the hashtag #605Day, and businesses are encouraged to get involved and plan their own events. Organizations interested in participating can pick up some great ideas here.

The Evergreen Media staff has diverse backgrounds. Some were born and raised here, while others are recent transplants. One thing we all have in common, though, is a shared love and appreciation for our great state. We took the time to answer a few questions about our South Dakota experiences and impressions. In honor of 605 Day, we’d like to share what brought us here and what we love best about South Dakota, and clear up some common misconceptions from people unfamiliar with the state.

Jenna moved to South Dakota to attend Black Hills State University. She assumed she would move to a larger city after graduation, but was offered a job with Evergreen in 2014 and hasn’t left since. Jenna likes the vastness of the state and all its hidden gems—not just the scenery and attractions, but “free to be” mentality and the kindness of its people. “Although it’s a low population and a large state, everyone is connected in some way,” she says.

One thing it is not is boring. “There is so much to do here!” Jenna says. “Most people will tell you about the outdoors, but I am not the ‘hiking/biking’ type. I love our little locally owned stores and restaurants, the character of the main streets, and all the events throughout the year, from concerts to outhouse races.”

Jay is a South Dakota native, having been born in Huron. He lived in other spots around the state, including Madison and Pierre, but none were a good fit. He was preparing to move to Arizona when a college friend in Rapid City convinced him to come check the area out. Jay had never spent much time in the western part of the state, but after visiting, “Rapid City swept me off my feet. It felt like an up-and-coming city that had a vibe I didn’t have to move across the country for.” Like many others, he appreciates the friendly and approachable people—that classic “Midwest nice.”

Jay would like to dispel the notion that country music is the only thing South Dakotans enjoy listening to.

Meghan was born in Yankton and has lived in Watertown, Sioux Falls, Vermillion, and Rapid City. She likes that we’re split down the middle and have a perfect balance of outdoor adventures in the west, a downtown that feels like a bigger city in the east, and plenty of space to relax in between.

“Honestly, I enjoy the misconceptions,” she shares.” I think there is a part of each that is exaggerated but true. Each state has them and that’s what makes them fun!”

John was born and raised in London, England, but moved to South Dakota in 2014 when Evergreen offered him a job. He considers the wide-open spaces, slower pace of life, and tranquility as highlights of living here, pointing out the small communities within communities and neighborhoods that are safe and welcoming. The outdoors are a fundamental way of life here, with an endless variety of options ranging from adventurous to relaxed and casual.

“People should appreciate there is so much more to the Midwest than the chance to fly over it,” he says. “More than the renowned monuments and flat farmlands; there are so many amazing stories and unexpected ‘real American’ sights to see.”

Alix is another 605 native; she was born in Aberdeen, and lived both there and in Brookings before moving to Rapid City. She appreciates the fact that South Dakota offers beautiful sights across the state; East River has vast open spaces and allows you to see for miles on end, especially around sunset, while out west, she says, “I don’t need to explain how lucky we are in the Black Hills. Look around!” To top it off, South Dakota residents are some of the most polite and helpful people you’ll find anywhere in the country.

One common misconception is that South Dakota is a flat, boring state. “There is a lot more here than you think,” she says. “You just need to slow down and look.”

Mark’s first introduction to South Dakota occurred in high school, when his dad was stationed at Ellsworth AFB. The family had transferred from Hawaii, where he was born; despite the climate and culture shock, he fell in love with the area and was reluctant to leave. After living in the Pacific Northwest for over 20 years he grew disillusioned with the escalating costs and influx of people, and decided to completely uproot his life and return to Rapid City. Convincing his wife was easy; after a quick visit in 2017 she fell in love, and they made the move in 2018. Mark loves spending time outdoors, especially in the Black Hills and Badlands, and appreciates the variety of weather and friendly people.

“When I told my friends in Portland I was moving to South Dakota, they thought I’d lost my mind,” he says. “They all pictured a flat prairie with cows and sunflowers. My Instagram posts showing the beauty of western South Dakota have turned them into believers!”

Jen was born in Pierre and never lived anywhere else until moving to Vermillion to attend the University of South Dakota. After graduating, she wanted to spread her wings and live someplace other than Pierre. She had fond memories of family trips to the Black Hills while growing up, so she decided to try her luck out west. Jen says there is so much to love about South Dakota, especially the friendliness of the people (this is a common theme), and appreciates the variety of things to see and do, as well as the natural beauty of the Black Hills.

“People that have never been here think that we’re a bunch of cowboys and rednecks,” she says. “We’re not all!”

Chris Valencia // Beauty of the Hills

Chris was born in Colorado Springs, Colorado and moved around a bit. He grew up in Wyoming and attended college there, eventually ending up in Hilo, Hawaii when the economic downturn in 2008 forced him to look for a job on the mainland. He ended up in Rapid City in 2009, and has called the area home ever since. Like most of us, he is enamored with the beauty of the Black Hills.

Chris is amused that many of his friends think there are cowboys in South Dakota. “Nope,” he says. “Real cowboys come from Wyoming!”

Ryan is the only person in the office who hails from the other Dakota—our neighbor to the north. His family moved to Rapid City when he was two before moving away; they returned when he was in grade school to be closer to family. Ryan admits that Bismarck and Fargo are cool towns, but “South Dakota wins with the Black Hills!” After a prior stint at Evergreen he relocated to Seattle for a dream job, but things weren’t as rosy as expected, and he returned once more to Rapid City.

Despite perceptions to the contrary, Ryan would like people to know that South Dakota does have running water.

Sarah Richards // From East to Midwest

Sarah was born in Pennsylvania but spent the majority of her youth in Iowa. She had never even been to South Dakota but was drawn to Black Hills State University because of their incredible photography program. After a single campus visit, she decided to take the plunge, and has been living here since 2017. There isn’t a lot Sarah doesn’t find appealing about South Dakota; she loves the wide variety of things to do in the Black Hills and the drop-dead gorgeous scenery. “If I had to choose one thing I like best,” she says, “it’s all the available hiking trails. My favorite is Little Devils Tower.”

Sarah hasn’t lived here long enough to be aware of many misconceptions, but would probably be quick to refute them anyway.

Jesse was born in Scottsbluff, Nebraska, though his mom is originally from Rapid City. The family returned when he was just a few months old, and he has lived here ever since. His favorite parts about South Dakota are the lack of people and unique landscapes—not surprising given his penchant for wilderness photography in some of the region’s lesser-traveled spots.

Jesse has heard that South Dakota is all flat and everybody is a farmer…neither of which are true.